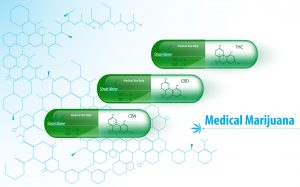 With medicinal cannabis becoming legal in an ever-increasing number of U.S. states and other countries, and with use of cannabis-based preparations booming, many people are learning about the diverse uses of cannabis medicine. This article looks at five of the top medical uses of cannabis.

Nausea and vomiting is a common side-effect of chemotherapy treatment, and cannabis has been shown to be effective in treating it. This use of cannabis has allowed people who were already very weak and frail to allow their bodies an opportunity to recover.

Even for nausea not caused by chemotherapy, many people have found that cannabis takes away much of the unpleasantness and queasiness and even allows them to eat more than they otherwise could. This has meant that medicinal cannabis has found widespread use among those who suffer from certain stomach upsets, such as travel sickness, ulcers and acid reflux.

Evidence suggests that cannabis has been effective in relieving the pain caused by neuropathy, fibromyalgia, multiple sclerosis and rheumatoid arthritis. It also seems that cannabis is safer than the opioids that are currently prescribed regularly to treat these conditions.

Cannabis is sometimes used by people suffering from cancer, for which it has been useful for relieving the intractable pain associated with it. Cannabis is gaining a place in many end-of-life schedules as it seems to ease much of the physical suffering caused not only by cancer but by general aging.

The soothing effect of cannabis is not limited to physical ailments. Many people use cannabis to alleviate psychological suffering. Post Traumatic Stress Disorder is one ailment that cannabis has shown encouraging success in the treatment of, and depression and anxiety are two others. This is likely because cannabis has a calming effect on the minds of people so afflicted, and allows them to find peace when it was otherwise lost.

Cannabis has also shown promise in helping people find insight into their personal problems. Some strains of cannabis promote a creative introspection that can help people realize things that were previously unknown to them. Because it is possible to take cannabis when one is alone and undisturbed, it can be used to meditate or reflect on problems with a fresh perspective.

The sleeplessness that often comes with nightly worry and anxiety can be treated with cannabis. It is also useful for treating insomnia that comes from the mental disquiet associated with many psychological ailments. Because the legalization of medicinal cannabis has led to advancements in understanding the chemistry of the plant, it is now possible to isolate the active ingredients in cannabis that work to combat insomnia, and separate these from the elements that energize the mind and get it buzzing.

Insomnia is sometimes caused by chronic pain or chronic fatigue. Like anxiety, cannabis can be effective in getting a person to sleep despite these problems. Cannabis users often report that they sleep more deeply and wake up feeling more refreshed than if they had gone to bed without cannabis. Preparations in the form of edible cannabis have been found particularly useful in relaxing the entire body before falling to sleep.

Several U.S. states now have laws making provision to prescribe cannabis for the treatment of epilepsy. It has been known for decades that cannabis had potential to treat epilepsy, with many patients experiencing a reduction in seizures. Although much of the evidence in favor of using cannabis to treat epilepsy is anecdotal, further liberalization of the cannabis laws ought to encourage further scientific research.

A family from New Zealand went as far as to relocate to Colorado just to have access to cannabis-based medicine for their epileptic daughter. According to the family, both the number and severity of seizures has decreased greatly, which has vastly improved the daughter’s quality of life.